When redeem clinic entered the world of semi-permanent makeup* / Microblading there were only a handful of qualified technicians in the country, since this time the industry has exploded to the point that there are hundreds if not thousands on technician throughout whole of the UK. Regrettably with this vast increase have come some poor standards of training and technique in the pursuit of profit. A quick search on the internet will bring up countless horror stories, pictures, poor substandard micropigmentation treatments. As a consequence of the latter redeem clinic are becoming somewhat experts in semi permanent makeup removal / Microblading removal for other technicians work (prior to then being re-worked by ourselves if needed). 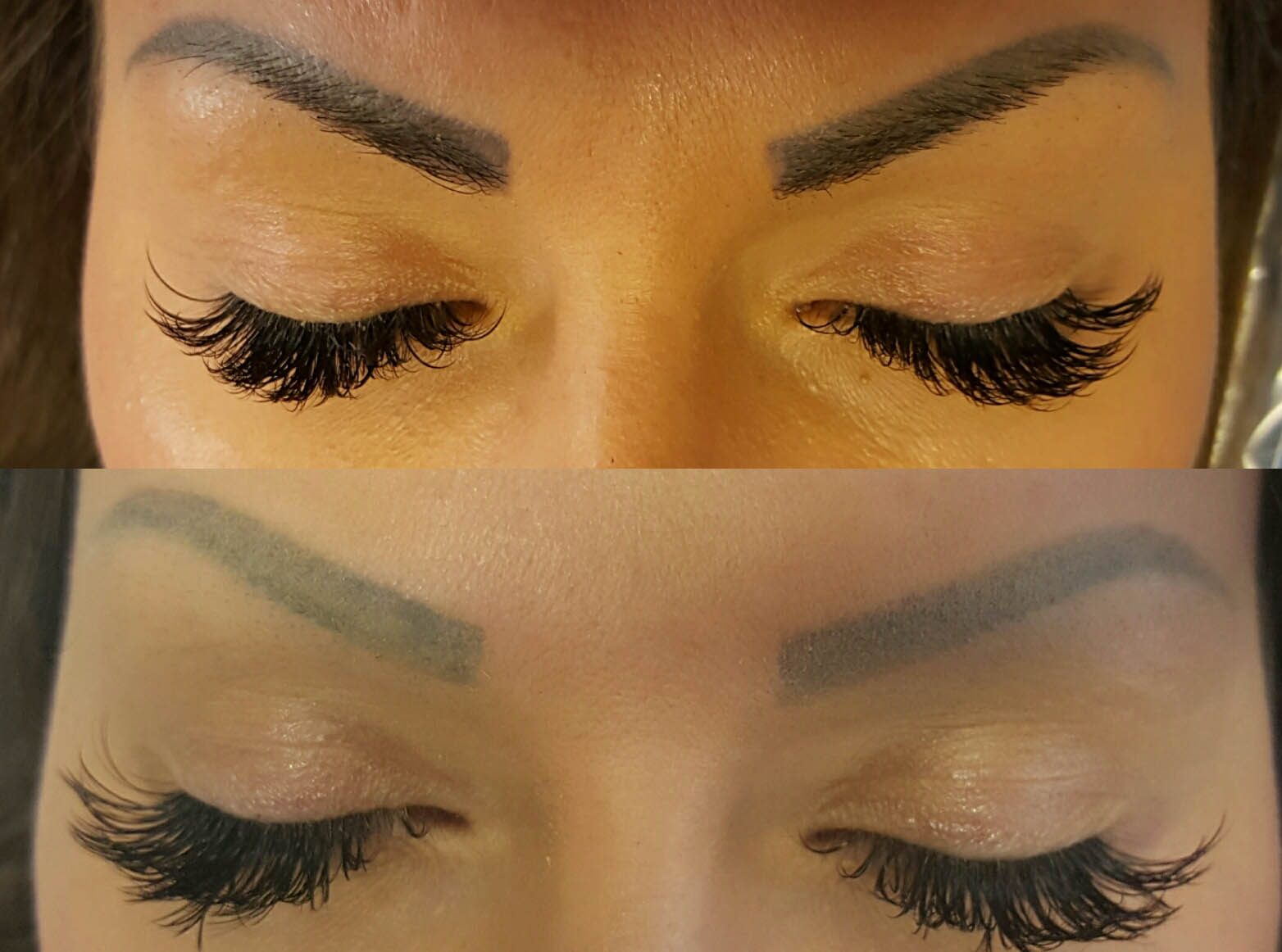 Although laser is very capable of removing most forms of micropigmentation pigments (inc semi-permanent inks *, traditional tattoo ink, Microblading inks), Redeem clinic only treat brows due to the health risks associated to eyeliner and lips. With eyeliner it is felt that microblading removal with laser possesses a severe risk of injury to the eye. Although it is possible to use silicon eyeball protectors one mistake outside the protected region could still see the laser penetrating the eyelid around the eyeball which could not be covered by the silicon protector and consequently severely injure the eye underneath or at worse cause blindness. Consequently Redeem clinic see this as a risk too far and do not perform eyeliner microblading removal . The skin to the lip area of our bodies exfoliates far greater than any other area of our bodies and as a consequence semi permanent makeup* pigments to the lips can usually completely exfoliate in the time period it would take to remove the pigments/inks over a course of laser tattoo removal sessions. Also the lips are very sensitive and prone to increased trauma when treated with laser which can cause quite a bit of pain, blistering and in some cases scarring.  For these reason Redeem clinic see little advantage of putting a client through microblading removal to the lips when nature will cope with the removal often just as quickly and with less risks.

The above said however laser tattoo removal for semi permanent makeup * brows, microbladed or tattooed brows is deemed to be perfectly safe and a very viable option for those wanting total removal of a previous technicians mistakes or for those looking for the pigments to be removed to a level that the professional technicians as those found at Redeem Clinic can re-work the area giving those perfectly shaped, hair by hair or powder effect brows the client had originally hoped for.  As well as treating 1000’s of semi-permanent makeup* clients to date Redeem Clinic have also been removing tattoos since the day they opened their doors and are now also recognised as one of the region’s most comprehensive clinics for tattoo removal and semi permanent makeup laser removal *, utilising ND Yag lasers, Ruby Lasers and Rejuvi tattoo removal techniques.

This extensive history of tattoo removal has given the technicians within Redeem Clinic a very strong understanding of microblading removal * works best with the variety of pigments out in the market place. Semi permanent makeup* pigments generally differ to traditional ink in such that they contain higher level of oxides within the pigment as well as are more often than not made up from a variety of colour pigments in order to obtain the correct shade the client was looking for.  This doesn’t mean laser cannot remove semi permanent makeup* pigments it just means extra caution is needed when approaching the removal, this is why Redeem clinic insist on patch tests prior to performing a full brow removal treatment. A patch test as well as ensuring the clients body is capable of coping with the microblading tattoo removal process also helps the technician identify if the oxide levels within the pigments are too great to allow for laser removal as well as identify other possible pigment colours within the original pigment. For those clients who have not used pigments as those found at Redeem Clinic that only fade out within a single colour range then they will have doubtless seen other pigments that fade to a green/blue or even red colour over time. If these other colours are found within the brow area then Redeem clinic have the laser equipment to remove these inks, yet regrettably it is usually a longer process of removal. Pure pigment colours such as blacks and shades are usually the easiest pigments to removal and respond best to both ND yag and Ruby lasers. 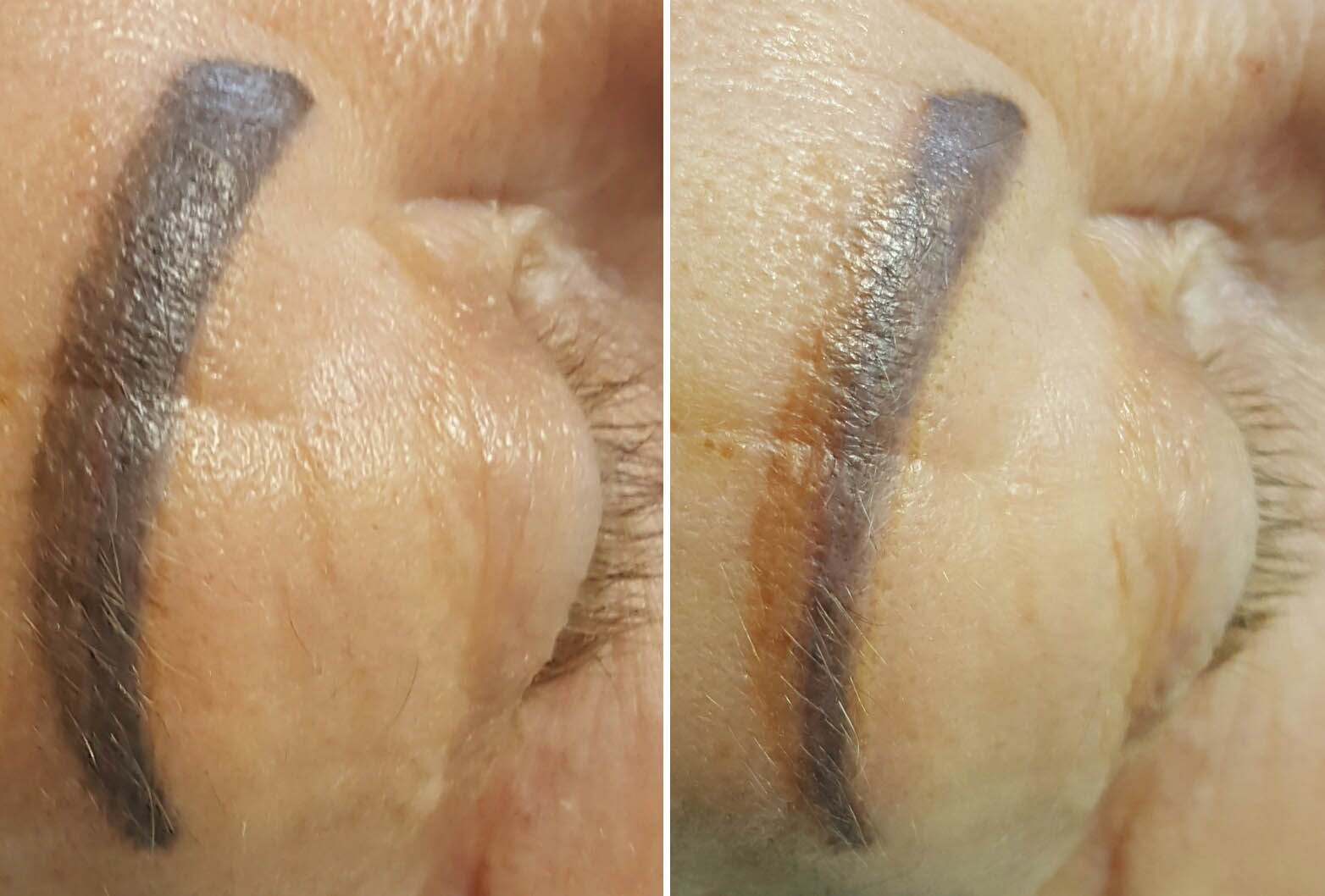 Microblading as well as semi permanent makeup* is becoming of very popular way of treating the eyebrow area these days. Many technicians sell microblading as semi permanent* in nature yet within Redeem Clinic we are seeing more and more clients who have had this treatment encountering permanent ink issues. As the technique of microblading wholly relies on the technician to insert the inks into the epidermis layer of the skin using a hand held knife/scalpel then in many instances it is not possible for the technician to have the dexterity to only insert the pigments into the very thin upper epidermis layer of the skin. The consequence of this is that some, if not all, the ink enters the dermis layer of the skin and in these instances the ink becomes permanent. Along with this some technicians also carry out traditional tattooed eyebrows treatments as an alternative to semi permanent treatments. The good news is that Redeem Clinic also perform tattooed eyebrow laser removal as well as semi permanent makeup laser removal and consequently hope to help all those that have suffered from their ‘brow hell’ not matter which process was used or mistakes made.

Although our laser removal treatments are only carried out at the Redeem clinic in Hull due to our expertise we find the majority of our clients actually travel from outside the region to make use of our exceptional tattoo eyebrow removal services. Our clients are welcome to attend our clinics in Leeds, Halifax, Harrogate and Sheffield (as well as obviously Hull) for their FREE consultations and should they wish to move to full treatment then we look forward to seeing them within our Hull clinic.

*Results may vary from person to person

You may be interested in visiting our more up to date and stand alone microblading and semi permanent makeup website also. If so please click here