Within the UK Microblading has taken the semi permanent * brow market by storm over the past couple of years. The main reason for this seems to be the low entry cost for the technicians to enter the industry in return for promises of high income opportunities. Although microblading has been around for a very long time indeed in Asia it is only a relatively new industry in the UK and has latched onto the coat tails of the micropigmentation and semi permanent makeup industry to the extent that many people are now seeing these treatments to be the same. Although there are similarities there are some fundamental difference, which we hope to highlight here. With microblading also looking set to enter the Scalp micropigmentation / Tricopigmentation markets also then many of the comments below relate also.

The leading difference between the two disaplines of Microblanding versus Semi permanent makeup (micropigmentation) seems to be the promise of a semi permanent procedure. As microblading relies the technician using a hand held knife to enter pigments into the skin via cutting the skin and applying the pigment into the area cut. Whereas with semi permanent makeup (micropigmentation) a precision digital hand piece similar (yet not) to a tattoo gun inserts pigment directly into the skin with a single needle (some times the device can have up to 5 needle heads at a time, yet more often than not 1-3 needles). The digital hand devises can control the depth of the needle and consequently the depth the pigment is entered into the skin (usually from 0.5mm to 3mm). With Microblading the depth of the ink that enters the skin is wholly reliant on the hand dexterity of the technician. When we realise that on overage the epidermis layer of the skin to the brow area is only 0.5mm thick then with microblading there is a high likelihood that the very vast majority of the pigments used will enter into the dermis layer of the skin. Pressure is required for the microblades to cut the skin and consequently added to hand dexterity it is very difficult to control cutting too deeply into the dermis. Once pigments enters the dermis layer of the skin, they act as tattoo’s and predominantly become permanent especially where the cuts are deep within the dermis. With semi permanent makeup the depth in which the pigment enters the skin can be highly controlled via the digital hand piece ensuring an even depth throughout ensuring a high concentration of pigment only enter the dermis layer of the skin. 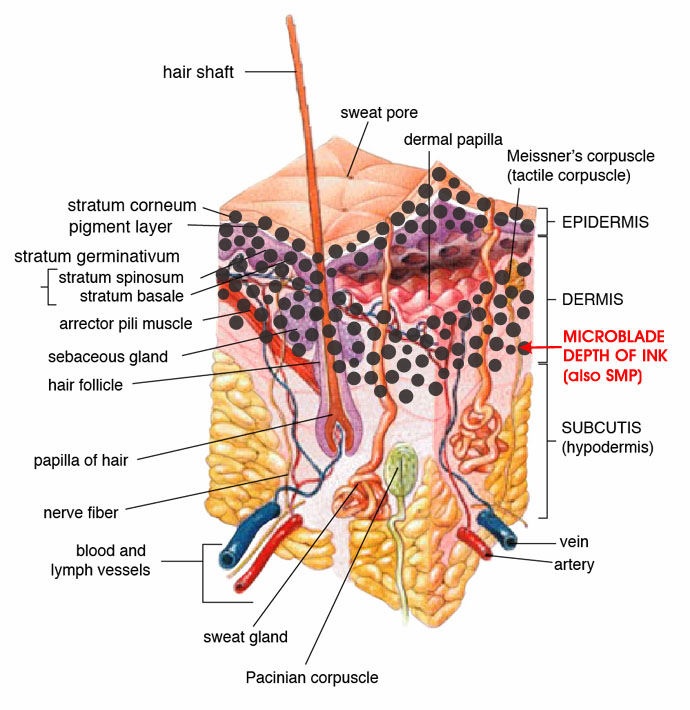 Is the ink permanent?

It’s true that with Microblading versus semi permanent makeup both forms of treatment can result in permanent pigments within the skin. In reality with semi-permanent makeup, to ensure the pigments last 18months – 5 years, then a small amount of pigment will enter the upper top layers of the dermis in the skin and as explained above these pigments often then become permanent. The latter said as there is only a controlled amount of pigment entered to the upper layer and over time as cell replace around them then the pigment becomes lighter and lighter to the extent where it can be very hard to see any remaining pigment at all. On average with microblading a much higher level of pigment enters the dermal layer of the skin, whilst also on average being entered into the skin in greater depth. Meaning over time more of the microbladed inks becomes permanent over time and as there is more permanent ink they are much more prominent and noticeable. 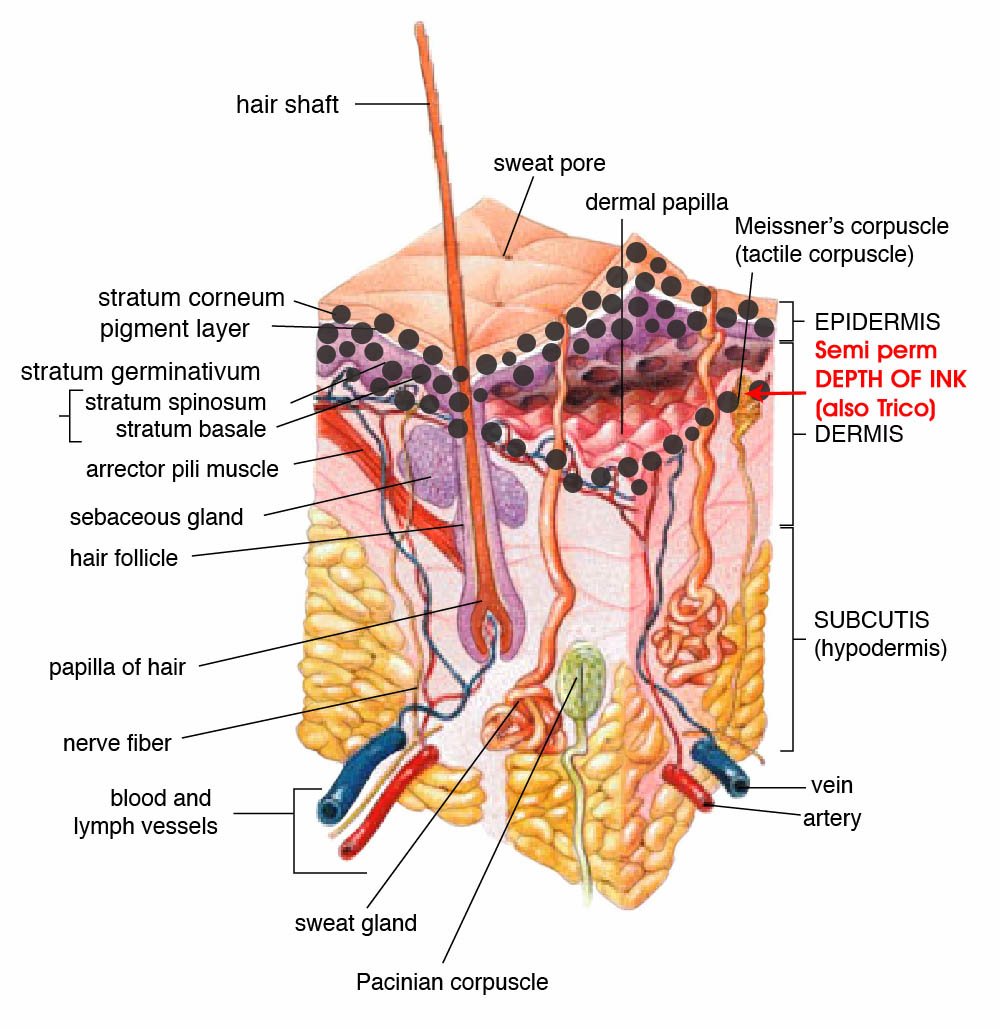 Do they require ‘Topup’ treatments?

When researching microblading versus semi permanent makeup people will notice that most technicians will suggest having a top-up treatment every 18-24 months. This is due to that fact that in both cases ink that was inserted into the epidermis layer of the skin will have exfoliated over time, reducing the depth of colour in each instance. Also often a proportion of the pigments within the inks used will be micro-pigments in nature and again over time the macrophages / our immune systems see these micro-pigments as alien particles within our skin attacking them and taking them away (as with virus particles etc). With microblading, as there is a strong likelihood that more ink is entered into the dermis layer of the skin than with semi permanent makeup then consequently more permanent ink remains. Over time this permanent ink can tend to migrate a little as well as change colour subject to the effects of UV/Sunlight, so where we once had wonderfully realistic hair strokes we not have faded, somewhat larger unnatural lines. This is where top-up treatments come into play. With microblading more natural more crisp hairline strokes are added, over and around the existing pigment, which initially revitalise the brows, making them look much more natural and on point. In reality what the microblade technician has unwittingly done is enter ever more pigment into the mid/upper area of the dermis. In years to come the latter means added hair strokes will be indestinquisable from black pigment below, resulting in a grey powder effect over a hair by hair look. As the microblade industry is only relatively young within the UK markets we are only just starting to see these consequences take place (with our microblade brow laser removal business becoming busier and busier). Well doesn’t the same happen with semi permanent makeup also then once it has been touched up? In reality it is still possible yet very rarely seen. Semi permanent makeup has been around in the UK for approx 10 years nows and in the case of the very vast majority of our clients the deduction of colour has been so great that we have yet be able to achieve the hair by hair appearance in the brow and none have turned to a full powder effect. It simply makes logical sense the less ink that enters the dermis the crisper the appearance of ink applied over the top. 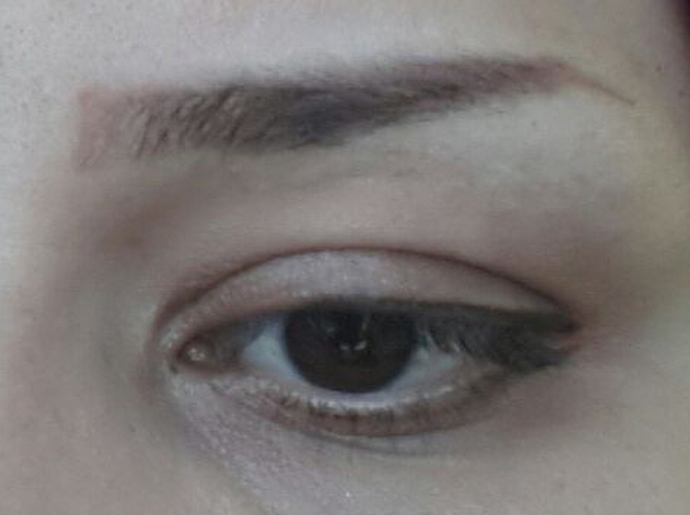 Are there long term issues? 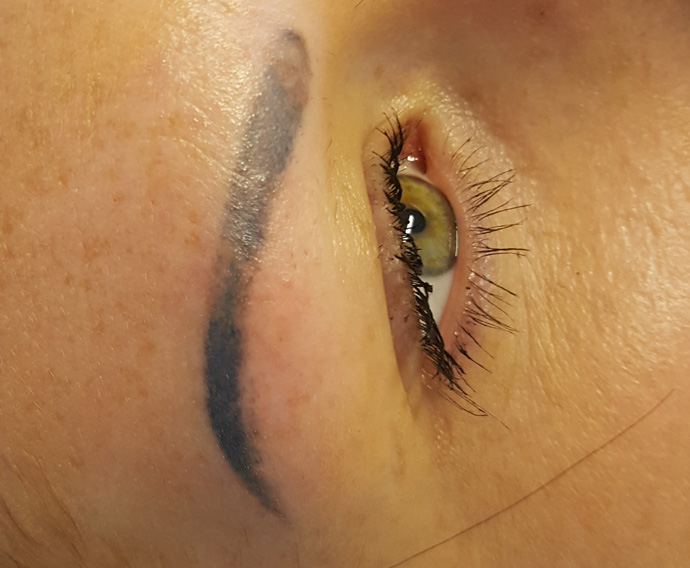 So now you know some of the leading differences between microblading and semi permanent makeup you may understand why Redeem Clinic choose not to offer microblading services. Semi permanent makeup results, look as great as microbladed brows, have all the convenience of microbladed brows, can be used to create hair by hair, 3D as well as powder effect brows, yet predominately without the long term issues we’re just starting to see from within this very new microblade market. Lets face it if microblading was a good as semi permanent makeup, it costs the company far less to carry out a procedure and had no issues, then why wouldn’t Redeem Clinic choose to offer it?  There’s always someone looking for a cheaper alternative yet in the well used words it seems that with microblading you may ‘get what you pay for’?

See our before and after photos